What about their rights?

If you have had an abortion, and suffer from post-traumatic abortion pain, there is hope and help at Project Rachel's website http://hopeafterabortion.com/.

If you have been raped and are being pressured into an abortion, or considering whether to abort, please see http://hopeafterrapeconception.org/MothersStories.html.

If you are suffering from either having had an abortion, rape, rape conception I have to warn you my passion on this issue (as obvious from overuse of font enhanced emphasis throughout) may have resulted in thoughts being conveyed in ways that will upset you. This is not intended.

Our "Witness to Life" activities are multiplying at my daughter's high school.  This is the group that I ended up being a regular driver and chaperone by chance (definition 7:  Holy Spirit's orchestration).  Instead of just the one Saturday trip to the Planned Parenthood in Aurora, Illinois - which was the largest abortion facility opened in the United States when it opened (since then this evil organization has opened larger facilities) we are now also visiting a facility in downtown Chicago. 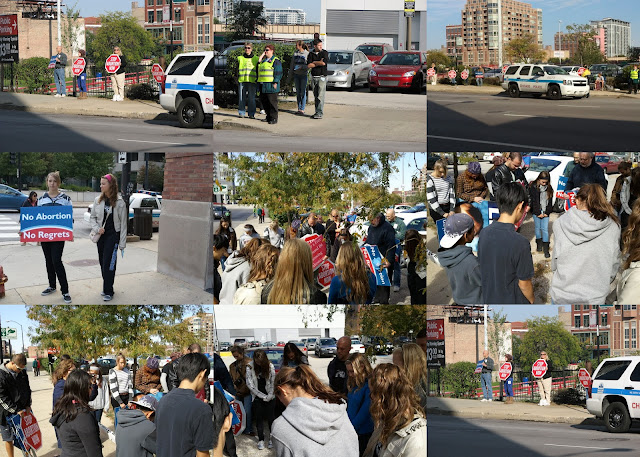 Before I start what I hope to be a persuasive, fact filled, inspired rant, I wanted to relay a couple of heart-touching incidents from this past Saturday when we went to the Abortion Clinic at I-90 - "the Kennedy" and Washington Boulevard in the Chicago Loop (downtown Chicago). 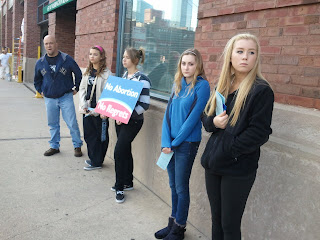 So here are my questions - we are told often by advocates for free, available, tax subsidized abortion facilities and abortions that the woman has the right to choose.  Here are some other obvious and not so obvious people that should have rights but do not currently in our country, and the disregard for their rights is increasing under the current president (Obama the one that needs to be defeated), and as bad as the HHS regulations are now, is their any question that things could get even worse in a second term?
Did you know? (Planned Parenthood 2009-2010 Annual Report via Lifesitenews.com)
In addition to its $320.1 million in clinic income and $223.8 million in private donations, Planned Parenthood receives $487.4 million dollars a year from taxpayers. And that number is drastically increasing. Taxpayer funding for the abortion giant has more than doubled in the last decade.

This increase is in part due to the fact that it is now reporting the numbers a little more honestly. For the first time, Planned Parenthood is reporting revenue from Medicaid as revenue from the government, taxpayers. Its latest report states, “In past reports, payments from Medicaid managed care plans have appeared as ‘health center income’ rather than ‘government grants and contracts’ ….”
So now that Planned Parenthood has graciously decided to stop under reporting the money it takes from taxpayers, we can see more fully, how much Planned Parenthood relies on the Government. Over 46 percent of its $1 billion total annual revenue comes from the government – from our tax dollars.
What about our right of conscience?  No where in the Constitution or Declaration of Independence does it state the federal government needs to ensure the right of a woman to terminate the life of the child in her womb through the misappropriation of other people's tax or health insurance dollars.  Yet that is what we are being told, and were inundated with during the Democratic National Convention.  I hope that the consciences of those that are lovers of God, and thankful for the gift of his Son, his Son's redeeming death on the cross, and the gift of the Ten Commandments and the teachings of Jesus are troubled like mad trying to reconcile how it is still OK to vote for the presidential candidate that is ensuring more funding from conscientious objectors who do feel killing innocent children in the womb is evil.
We believe in the God-given right to life and that a woman's choices, once pregnant with a child, do not justly include the right to terminate the life of the child within her.  Her rights to not have to take care of herself and the baby, not have to endure the discomforts (and joys) of pregnancy and child birth do not logically, or justly, nor in the eyes of God as reflected in the Fifth Commandment:  Thou shall not murder trump the child's right to the health and safety of her womb to prepare for birth, nor the right to life, love, and care once born to pursue life, liberty, and happiness like the rest of us.
Why do some rape and incest victims say "abortion was not a good solution and I would not recommend it to others"?


Did you know? (Sandra Mahkorn, "Pregnancy and Sexual Assault." The Psychological Aspects of Abortion (Malls and Watts 1979), 53-72.):
Finally, Thank God (!!!) that Romney did well last night.  I don't know about you, but this is proof to me that God heard mine and others' intense prayers that God's favor would be upon him, and that he would have the inspiration of the Holy Spirit to do very well in the debate.  Given that I was rather disheartened by his RNC nomination acceptance speech, thought he seemed a bit plastic, and his doing phenomenally better last night, how could I not be thanking and praising God for answering prayers?  I know not everyone considers him the perfect candidate, so I will tell you I do include, "if it is your will" when I pray.

Will you join me in continuing to pray for the defeat of Obama's re-election efforts and continued help from God for Romney and Ryan to continue to do better than their human best in the campaign for the leadership of this country?

Pat Buchanan, "Romney did even better than Reagan ever did."

What?  Pat would know, and yes, prayer is powerful!  Romney wasn't perfect, but he was really outstanding, and Obama was just OK.
Posted by CWrites at 1:35 PM