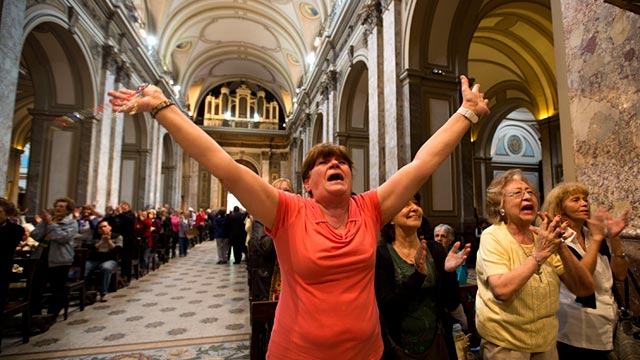 This is a woman in a cathedral in Buenos Aires, Argentina's Metropolitan Cathedral.  She looked a bit more joyful and grateful than I felt, but I was really VERY happy.  It was really exciting day to be Catholic, wasn't it?

I was in line for airport security at Ohare when I got an email from a workmate, and then a call from a family member to let me know we had a new Pope!  I had been watching the smoke cam, and the seagull that seemed to enjoy being the center of attention perched on the chimney before I left.  Sure enough when I got to the airport that was actually a headline on the foxnews website, but I don't think it lasted long!  I got the ewtn.mobi going on my iPhone and watched the crowd growing and the excitement increasing.

Are you happy?  Were you excited waiting to find out who?  I heard Francis in Italian on the ewtn.mobi feed but didn't know if that was his real name or his Pope-name.

Exciting how humble he is isn't it?  Instead of living in the Archdiocesan mansion he lived in a room downtown, took public transportation, instead of the bishop's limousine, and cooks his own meals!  The priests in our local parish don't even cook their own meals!


I love that the Pope is from Latin America too.

Weren't you wondering about the story that he "came in second" in the 2005 conclave?  And that he got emotional and told the cardinals to stop voting for him.  How would that get out?

I got a chance to answer some questions and criticisms about the Catholic Church, that I love, while traveling  with my 3 business co-workers today.  I was happy to share and answer questions.  Not usually a good opening so much as the day of a papal election.  I was telling them about St. Francis of Assisi, St. Francis Xavier, St. Ignatius.  It was fun.  Like you who are reading this, I am fairly geeky Catholic.  Similar to say Jimmy Neutron talking about his new chemistry kit.

Did you hear about the people, "all but the very young and very elderly" that broke into a trot when they heard the cheers and bells to run into the plaza?  So exciting!


God Bless our new Pope, and this One, Holy, Catholic, and Apostolic Church!

(Jesus said) "But you are not to be like that. Instead, the greatest among you should be like the youngest, and the one who rules like the one who serves." Luke 22:26 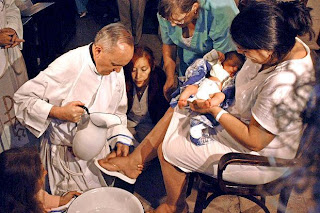 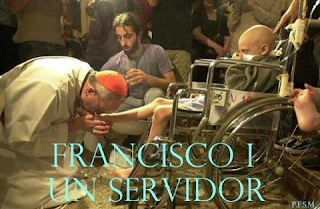