My husband and I shared a moment this evening where we were both struck by the beauty of the sky.  I shared with him that one of the reasons I like to run between 8 and 9:30 in the evening is because I love the sky at this time.  I had just cooked the dinner for the family, but seemed like I might as well go for a run.

Before going, I had to take some pictures of the sky.  At first with my husband I noticed the design in the sky of the whisps of clouds.  When I went back out I was struck by seeing how the higher clouds were golden with light by the setting sun, while the lower clouds were dark gray. 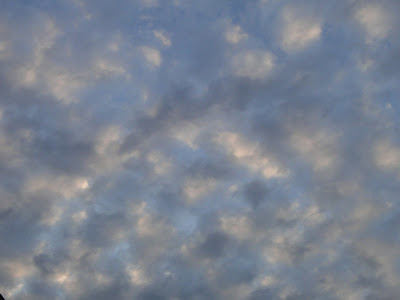 I was struck by the imagery of how the clouds closer to the earth reflected not the sun, but the darkness of our world.

The challenge is to get up above the darkness, to seek the light, so that we can reflect the light of the Gospel to those around us.  The closer we are to the Son, through prayer, the Sacraments, Surrender to Holy Spirit to heal and transform us in love, the more we will reflect the light of our Lord.

Some people favor bird watching, I am a sky watcher.  I love the glory of the sky.  Especially the play of the gold on the white of the clouds. 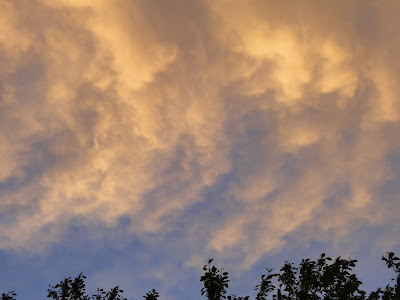 I did go for a run tonight.  It was my longest of the year.  The sky was gorgeous.  As I was running I offered the pleasure I had seeing the beauty of the sky during my run.  I would run a bit faster when I was facing away from the sunset, so I could get more quickly to where I could see the sunset.  It was getting dark as I neared home when I was surprised to see there was still quite a bit of gold left above the horizon.  I thanked God for that too, as it seemed to be a gift since it was after 9:30 PM.

"If you offered Me your joys and your moments of recreation, I would send you few trials because it is only your union with Me that I am seeking, and as a rule you come to Me only when you are unhappy.  Then come - oh, come always."  Jesus speaking to Gabrielle Bossis in He and I

This morning I attended another monthly visit to the Planned Parenthood in Aurora, IL.  I go there almost every month with my daughter's high school Pro-life team.  In another post I reflected on seeing mothers driving and walking daughters in for abortion.  Today I saw two fathers driving their daughters in.  One of the daughters was in the passenger seat when she passed us.  She was clearly crying.  We were attempting to hand out literature as our first attempt at sidewalk counseling.  Neither of the fathers stopped to let their daughter talk to us or take any of our brochures.

The leader of our team told me after that he saw a woman come out and cry while smoking.  He said that sadly he was pretty sure she did go through with it, because she was moving slowly when she left the building.

At about 10:15 a.m. an ambulance passed us with lights and siren blaring.  It pulled right to the front of the center and then it was followed by 3 police cars.  Those praying outside the center started praying more intensely for what was probably a poor girl inside with a complication from an abortion.  Many started taking pictures too.  I was asked to take some as well, so I did.  Here is one of them: 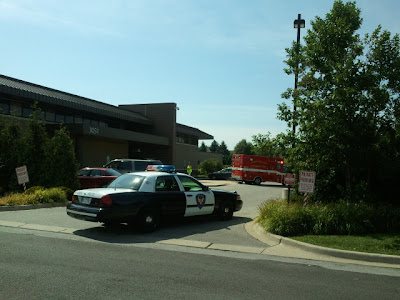 They did not bring the woman out on the stretcher in view of our cameras.  They moved the ambulance round the back and then had her brought out.  The event made things much more tense outside the center as well.

The one gentleman that is there every week with the graphic sign from Operation Rescue, decided he needed to clarify for the Police where he could stand.  He was threatened with arrest, but not taken in.

Later there seemed to be more critiquing of the advocates for the unborn and the mothers and fathers from their fellow advocates.  Some were yelling to others where they could stand.  Others were confronting each other saying not to yell over each other.  Only one should talk at a time.

I also saw a woman that I think did have an abortion, follow her mother, and walked past the sidewalk counselor that was boldly going up to the property line, and trying to persuade the girls to go to the nearby woman's center instead. The woman lit up a cigarette quickly just so she could blow smoke at the counselor.

This counselor was completely unaffected.  I think she has been doing this for a long time.  She was even trying to engage the escort from Planned Parenthood "to humble herself before God."  She said, "You are beautiful on the outside.  Why not get beautiful on the inside and stop facilitating the murder of the unborn?"

Before this all happened a woman came up to me and the two high school girls I was with.  She said, "You all are saved right?  That's why you aren't just standing around praying the rosary."  I said, "Actually the two can coexist."  I showed her my rosary ring.  "I've been praying the rosary on this, and Jesus Christ is my Lord and Savior."

One driver passed us and and yelled across the street from us, "Do you have to have the aborted fetus picture.  Really?  Do we need aborted fetuses out here?" 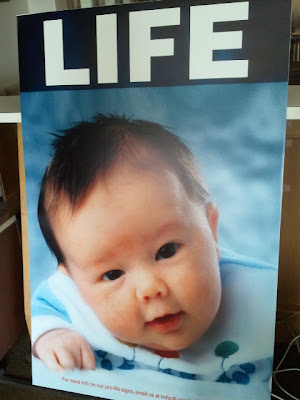 If I were quicker or more experienced (only have 7 months experience visiting centers), I might have crossed the street and explained to the gentleman that  we were actually in agreement with him.  He doesn't want to see any more pictures of the aborted babies, and we don't want there to be any more aborted babies.  I don't like the signs that show the truth of the outcome of an abortion.  They are effective though.  They tend to increase the anguish as Mary has recently commented, and intensify our prayer and actions to stand against this evil.

Also the same Operation Rescue gentleman I mentioned argued with the Police, he said he was with a group that had a bunch of these signs and a woman pulled over her car, got out and brought her baby over to show them and thank them.  She said that had she not seen those signs, she would not have had her little boy.

When I was riding back on the bus I reorganized some of the brochures so they would be in good order for our next trip.  Seeing the fathers driving daughters stuck in my head, and hit a nerve when I read this in the Pro-Life Action League brochure entitled, "Abortion for victims of rape and incest?  No:  They deserve better."  I read the following:
These quotes from actual incest victims were included:

Again recalling the fathers driving their daughters, I would suspect the incest number would be low, because if the abuser is driving the girl for the abortion, it is unlikely he would let her check incest as a reason, or he would otherwise intimidate her not to say anything.  And of course I have no idea why the fathers were driving their daughters.  Just when you see a teenage girl being driven by a man that appears to be her dad, and the girl is in tears, and the father is stone faced, it makes you wonder.

98% of abortions are from "personal choice":
50% of women having abortions say they were using contraception the month they got pregnant with 16.9% saying they used it properly but it failed.  You'll remember one of the arguments for free contraception is to reduce abortions.

Please join me in continuing to pray, act, and vote as advocates for the unborn, and their mothers.  Babies come to violent ends in these centers.  It does sicken me that there is nothing we can legally do to stop this. We have prayer, which is far stronger and more effective than we can imagine.  We have our presence, our words, and our signs.  We can also vote.  If anyone is unclear who to vote for in the next election, it is the one that can defeat Obama, and whichever candidate for House and Senate is approved by the Susan B. Anthony list.

14If my people, which are called by my name, shall humble themselves, and pray, and seek my face, and turn from their wicked ways; then will I hear from heaven, and will forgive their sin, and will heal their land.

If you are a woman or man that regrets and suffers from having an abortion, there is hope and healing.  Please follow this link to Project Rachel.
Posted by CWrites at 1:37 AM